Walking through the playground, you could see what it once was. Several small play shelters have signs above them — “Bakery”, “Mechanic”, “Hairy Bug Hairdresser”. There is a soft-fall road weaving it’s way through the playground, connecting each of the “stores”. A long bridge creates the main structure of the play equipment, with tunnels and slides and poles coming off the sides. Large logs have been carved and painted, turning them into cars and trucks where kids can sit and climb. There was an electric BBQ which sat alongside a small lake, the foot paths weaving along the waters edge and around the garden beds. The space was well designed, well landscaped. There is no doubt this playground was a great family destination — the key word being “was”.

A local resident told me about how people would travel from all around Melbourne’s western suburbs to come to this park when it was first built. The weekends and holidays would see it alive with activity. And while it still may busier than parks which have been built without any imagination, it definitely has seen better days.

Gazing around now it was clear that, in the twelves years since it was built, the park had aged considerably. Paint was peeling, or was completely removed, from just about every section of the playground. A painted pole stood in one section, holes running up the side where something, possibly a sign, was once bolted. A rope ladder was being held together by red duct-tape. Multiple pieces of the playground had broken, been boarded up, and never replaced.

The grass, once planted as turf, has become overrun with weeds, and lack of consistent watering and feeding has left it patchy. Rubbish can be seen blown into the garden beds and along the lake. What was the place to go in the neighbourhood, now looks tired and worn out. You can see the potential. You can see what was meant to be. You can hear the empty echoes of good intentions. But what is left is a shadow of what it was, or what it could be.

This is no criticism of Developers. Developers have their objectives, and typically they deliver very well on them. But the nature of their work is that they ultimately leave a community. They build and even maintain beautiful facilities, but ultimately they go and start building somewhere else. By nature of their work they are not invested long-term in a neighbourhood. And we shouldn’t expect them to be. They are there for a time, and then they leave.

Nor is it a criticism of local Council. Councils cannot deliver these kinds of infrastructure projects without the Developer. And when they get handed over, these parks and gardens and facilities become one more thing to maintain in an ever increasing portfolio of property. A Council in the growth corridor will have multiple developers delivering community infrastructure, all at the same time. The sheer volume of infrastructure can be overwhelming for Council to manage and maintain, often without the financial capabilities required for such an operation. Technically, the park is Council’s responsibility and they should do their best to maintain their own assets. However, to expect the Council to keep things in mint condition after the Developer leaves (especially given the comparative budgets for facility maintenance) is perhaps a little unfair. 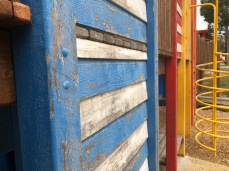 Worn surfaces of the Bridge

Imagine if there was a neighbourhood of people who loved their local park so much that they used it, cared for it, and maintained it. Imagine if a small group of community members took the time each week to collect rubbish that had accumulated on the ground in playgrounds, gardens and along their streets. Imagine if neighbours developed a “cleaning roster”, purchased a communal broom or leaf blower, and used it to clean the public foot paths, bike paths and drains, blowing the bark chips back into the garden beds and around the playground.

Imagine if local residents had an annual working bee at their playground to touch up the paint, to weed the garden beds, to perhaps even fix some of the broken things in the public spaces around them. Imagine if a community organised themselves in such a way that they took care of the places they shared in the neighbourhood, and advocated to local council, government, to business, and NGOs for the benefit and betterment of the place they live. Imagine if it was not left up to one person, but many people chipped in with small contributions that made a big difference. Imagine living in a place that took responsibility for and cared for the neighbourhood and those who live there.

Shani Graham, in a popular TEDxPerth talk, talks about how she posed a question to her neighbours, “What would we like Hulbert Street to be like?” The answers resulted in a street who had weekly pizza dinners, created a street cinema, built a Street Cafe for coffee and drinks on Friday Nights, gardened the verge and vacant public land, painted street murals, played games together in their front yards and on the street,  and even constructed a neighbourhood skate ramp! Shani Graham tells a story of boy who told her that he had trouble concentrating one day because he was wondering what new and exciting thing was happening in their street while he was at school. The Hulbert Street neighbourhood in South Fremantle decided to take ownership and responsibility for the place they lived, and in doing so, they turned a street into a community.

This kind of community may seem out of reach, and perhaps aspects are. Perhaps having a skate ramp in your street is just not possible. Perhaps it would be dangerous to try and host a cinema on the roadway. But the essence of what Hulbert Street has been able to achieve is not that difficult. Hulbert Street, at it’s core, is a group of people who care about one another and the place they live. They are a community who dared to ask, answer, and act on that original question from Shani Graham: “What do we want our street to be like?”

In new housing estates, like the one where I live, asking this question while the developer remains seems a bit strange. The building of the facilities in the neighbourhood is not completed, and people (naturally) seem preoccupied with building their own homes. The Developer and Council seem to have a lot to say about what resources and facilities our neighbourhood will get, and it can often feel like we don’t have the opportunity to design and create our neighbourhood the way we would like. Nor does it seem necessary when someone else is doing it for us, and often doing a reasonable enough job (if they weren’t chances are we wouldn’t be living there).

When the developer leaves, we need to be already living like we own the place! We need to have already formed Neighbourhood Associations, have mobilised streets of people who take responsibility for the public space around them. We need to be looking after our nature strips, helping our neighbours with theirs, looking after the parklands, and seeing that Councils and Government know about the challenges we face and has the opportunity to do something about them. And when they don’t, or can’t help us, we need to give ourselves permission to get creative, and to live with some imagination.

Too many of our neighbourhoods are bland and boring places because people fail to live with imagination! Too many of our public spaces become drab and unkept because we fail to be creative and think that it’s someone else job to maintain that space, or program that event. But if we start thinking with imagination and living creatively, like a small group of people from South Fremantle, we too can transform our streets and turn them into communities!